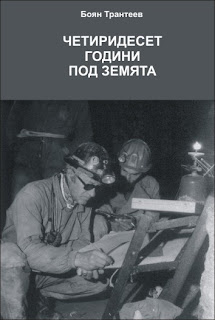 Peter Tranteev is one of the most important figures in the Bulgarian speleology after the Second World War.He makes his first steps underground in his childhood in the cave Temnata dupka near the railway station Lakatnik, district of Sofia (1932). Since 1939 he visits the collections of the Bulgarian Cave Society (BCS) and in 1946 becomes member of this society. As student in geology/geography in the Sofia University he takes part in a research team for investigation of the caves in the karst regions of Karlukovo and Lakatnik. From the beginning of 1949 he is secretary of a student research team at the BCS. After one year of activity the team stops his work. P. Tranteev continues his investigation on the Bulgarian caves with colleagues and friends. Till 1958 and long years after that his home in Sofia is gathering centre of his adherents and followers. To Tranteev belongs the initiative for establishment of the Bulgarian Federation on Cave Working (initially Republican Commission on Cave Working) in 1958. Since 1958 till his death in 1979 he was regular and non-regular deputy president of the federation. In his 20 years long activity he acts as leader and responsible organizing person of dozens of international and republican expeditions for investigation of Bulgarian caves. Guests in these expeditions were participants from speleological institutes from Belgium, Great Britain, German Democratic Republic. Poland, USSR, Romania, Turkey, Hungary, France, Czechoslovakia, Swiss and Yugoslavia.Some of the expeditions were organized jointly with the Bulgarian Academy of Sciences and other scientific institutes with an activity close to the speleology.Tranteev required elaboration and execution of scientific programs of the cave expeditions not only for Bulgaria, but also for those working abroad. His understanding on development of the Bulgarian speleology was a perfect combination between the sports training and the scientific investigations underground. The teacher of several generations Bulgarian speleologists manage to combine the life experience and knowledge of the elderly speleologists with the energy of the younger amateurs. Twenty years long (1959-1979) his endeavour was his younger follower to attain proficiency not only in getting below the surface in the caves but also to obtain the necessary knowledge of doing scientific investigations underground, as well as abilities in mapping and documentation of the caves. End of 1978 the instructors in speleology (master-amateurs) were 678 and those finished a course for a badge-bearer “Peshterniak” (=Speleologist) (amateurs) – more than 4000. In 1958 there were three first clubs on speleology and in 1978 the clubs are already 46. On his idea and with the volunteer work of Bulgarian speleologists was built the National Cave Home near Karlukovo, district of Lovech as a base for training of pedagogical specialists, National Museum of Speleology and Scientific Research Laboratory.In 1973 he and P. Nedkov found the Life-saving Team at the Bulgarian Federation on Speleology.From 1966 till 1974 P. Tranteev works as specialist in speleology consecutively in the Institute for Zoology and the Nature Protection Commission. In the same time he works on the scientific themes: The Caves in Bulgaria, The Cave Pearls – Genesis and Systematization, Ice-Caves in Bulgaria, The Names of the Bulgarian Caves. The outcomes of his investigations in the karst-regions of Chiren/Liliak and Karlukovo are used for the building of the water-supply of the villages. In conjunction with Dr. P. Beron he works on the Biological Characteristics of the Bulgarian Caves. They start a long-term program on investigation of the caves in Bulgaria. The aim is the writing down of an encyclopedia on the Bulgarian caves in several volumes. The death of P. Tranteev stops the execution of the joint intention.He considered the map of each cave with an attached scientific description as a main scientific document and base for further investigations. Following are his works: Questionnaire for cave description (1966), Dividing Bulgarian caves into districts (1965), Generally adapted symbols for mapping (1976) (part of them are symbols adopted by the International Union on Speleology), Terminology of the Karst and Speleology in Bulgaria (1977). A book of him goes into mapping of caves and precipices (1981).In the list of the more than 270 Bulgarian caves and precipices, investigated and mapped by him, might be met some of the longest and deepest in the country. In 1974 he lays with Eng. Radushev the beginnings of the Main Card-index of the Bulgarian caves. The maps of 120 caves were prepared by members of the BCS (established 1929) till 1949. End of 1979 the Main card-index of the Bulgarian caves contents maps with scientific descriptions of 2800 caves.Peter Tranteev has more than 300 publications in daily and periodical press and 8 books including several monographs on the Bulgarian caves.Already 1948 he established contacts to his colleagues – speleologists of speleological institutes and social organizations on cave investigation abroad. P. Tranteev takes part in several international congresses and workshops on speleology since 3rd International Congress on Speleology (1963). On the 5th International Congress on Speleology (Stuttgart 1969) he presents his work “Höhlenperlen – Genesis and Systematik”. He participates also the 6th International Congress on Speleology (Olomouz 1973) with his paper “Morphologie und Genesis der Höhle Lepenitza bei der Stadt Velingrad”. He leads several international expeditions abroad: in the desert Karabi Yaila the Crimea (1965), Eisriesenwelt (Austria 1968), Gouffre Berger (France 1969-director of studies), Ozornaia (USSR 1971) und Bergerhöhle (Austria 1974).We have to thank him for the growth of the international authority of the Bulgarian speleology after 1958.He is an expressed protector of the nature. With his assistance hundreds of areas, natural landmarks and objects including a lot of caves were declared under protection.Tranteev makes efforts for investigation and public development of the first seven Bulgarian caves as tourist objects.In his person the modern speleology and the organized cave investigation in Bulgaria lost his founder and initiator, the Bulgarian speleologists his loved teacher and the Bulgarian caves the passionately enamoured of them investigator and protector. This biobibliography contains complete bibliography of publications and the list of the bulgarian caves mapped, discovered and investigated by Petar Tranteev.
© Boyan Petrov Tranteev, autor, 2005
ISBN: 954-8827-03-4
Публикувано от БиВ Трантееви в 5/31/2009 07:51:00 сл.об.